'Frank' as he was known was between 12 to 13 years old. He weighed 1780 pounds and towered 11 feet at his hump. A purebred Woods he was special to the rancher as he was the original bull of the herd. He sired approximately 160 offspring since the rancher obtained him back in 2000. I was contacted by the rancher's son Lee Benoit March 20, 2008 concerning the suspicious death of one of their bison. They discovered him on March 13th. Last seen alive on March 10th. I shared this case on MonsterQuest Cattle Killers episode.
Photo below is the remaining herd of bulls (14 of them). It was dangerous for me to be in their pasture. Lee was present on his quad the entire time to make sure I was safe. Several trips were made. Not only did I examine the carcass but I also worked the scene. Including collecting numerous soil samples and controlled samples in five different directions in a very wide circle. The ground was frozen so that task was quite difficult. I had to return at a later date and still the ground was hard but I was able to work it. One cup's worth per collection. Using a plastic spoon as required. Soil had to dry thoroughly before I could carry out testing.
Based upon magnetic particle amounts and placement I was able to rule out UFO involvement. A theory put in to practice. Say for example a UFO 30 meters in diameter had been over the site of mutilation then theoretically there would have been a concentration of magnetic particles in a 30 meter radius. To this day I have not been able to rule out terrestrial (human) involvement. 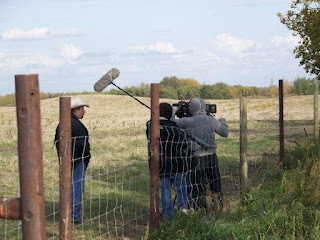 Cases from
Saskatchewan & Alberta
Involving Cattle & Bison
Discoveries
Possible drop in level of water source nearby.
Many seem to occur on or between New moon and first quarter moon.
A tracking implant had been placed along the lip of cow's lower jaw then was removed at the time of mutilation. Leaving behind two puncture holes and impression of elongated chip under the skin. (Cow had been examined by a vet prior to its death.) An RCMP officer examined the carcass before my arrival. He cut and removed a section of one side of the lip along lower jaw. That got my attention. We flipped the cow over and I discovered the officer had cut the wrong side. I was not suppose to find this. (Morrin, Alberta. Family had experienced 5 mutilations within a month.)
Many instances cows were examined by a vet prior to their deaths, for prolapsed uteruses. They had their calf then were discovered dead and mutilated within a couple of months.
One cow had been eating at the time of its death. Barley stubble was held fast between the teeth of her upper and lower jaws. Same thing with a bison except a wad of bison hair was held fast between the teeth of his upper and lower jaws. Suggested he was behind another when he panicked then bit another bison in his way. Instant death with these two animals.
One cow was found dead at the base of a tree. Laying on its back. Feet straight up in the air. Leaning against the tree. Traces of her hide could be found all the way up the tree trunk as if she had fallen from the sky down against the tree.
Underside of a cow's body the hair was in a large spiral pattern. Indicating she had been spun around at high speed against the ground.
Some report seeing strange lights in the sky. Pay attention for 'orange' lights. Not UFO related.
Some reports of humming sound in the area around the time.
Herd was bawling and running around. Frightened.
Sporadic shaved sections on a bison bull. Hair lay on the ice and snow around its body. Where hair had been removed or shaved was singed. Lab results revealed traces of 3-hydroxyanthranilic acid (3HAA) 'on' the hair.
Track-like impression around the rump of bison bull where it had been hoisted - postmortem. The rancher had moved the carcass closer to his house where he could keep an eye on it. He had only moved it by its neck. Bull weighed 1780 pounds.
Unusual amount of ice discovered around the body of mutilated bison. More than body heat would allow. Indicating water had been used.
Four-legged scavengers will not approach the carcass. Predators are also opportunists. However they will not approach the carcass either. It may just mean no scavengers or predators were present at the time. Regarding the bison case, sign from scavenger birds was present on the carcass. Droppings.
Missing eyes are often associated with scavenger birds as they are known to go for soft parts such as eyeballs. However, if these animals are being tested missing eyes will have been removed for testing. An animal's entire medical history can be obtained from an eyeball. If one or both eyes are still intact upon discovery the investigator should collect it and then keep it frozen until we can find someone who can assist us with it. If anything was used at the time of mutilation to euthanize the animal or anything else the eyeball will tell us.
Remainder of the herd refuses to go near the carcass. This is unusual behavior as cattle are known to have a curious nature. Where a human body is even concerned, cows have been known to hang around it. It most likely indicates something out-of-the-norm and frightening had occurred. They were there when it happened. Having witnessed it they are too afraid to get close. They know a member of their herd is dead. 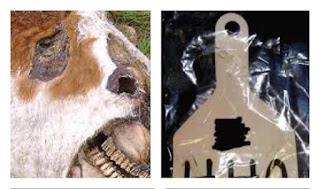 7 year old Simmental/Hereford cross was found with her hind legs straight out behind her. Front legs to the side. Body facing east. Head twisted back to the north. I found her ear tag 45.5 feet north of her body. It had been removed from her missing ear. Hole in tag was undamaged. Prior to her death she had been examined by a vet for a prolapsed uterus. She had her calf then was found dead and mutilated 2 to 3 months later.

"There are some ranchers who are battling a legitimate problem. This is their livelihood and it's as serious as it gets. We would be remiss to brush off every single case based upon biased opinion."
I've been told vets who have been asked to come view the animals have already made up their minds about what has happened before they have even exited their vehicles and had a chance to view the carcass. Effected families repeatedly relay to me the callous way they've been treated.
Sometime during the 80's one ranching family in southern Saskatchewan lost a number of cows to mutilations. They were told by their vet to keep quiet about it. This was on the phone and then again in person at their ranch. Just to make sure they understood what they were being told. It was not pleasant. They were handed a pamphlet on how these mutilations were nothing out of the ordinary. The whole ordeal of discovering these deaths, having lost their animals and then the treatment they received afterwards was terrifying for the family. An RCMP officer had also visited them and had repeated word-for-word what their vet had told them about mutilations. If anyone has a copy of one of these pamphlets I'd be interested to see it. I should also clarify that I have not received any reports where an RCMP officer may have acted in a threatening manner. None whatsoever. I cannot say the same about the vet in the above incident.
In 2008 a newspaper article in Saskatchewan shared a mutilation case in which a vet agreed was suspicious. She was immediately silenced. I approached the veterinarian department at the University of Saskatchewan but was flatly refused any assistance.
Ranching Background
Barb was raised on a 160 acre then on to a 20,000 acre remote cattle ranch in prime wilderness country outside Smithers, BC. Known for its world class predators and prey species. She is an accomplished horse rider and handler when it comes to working cattle. She has dealt with every aspect of raising cattle and horses. Growing up she participated in 4-H Beef as a junior and senior member. Receiving badges in husbandry, judging, demonstrations and public speaking.
Barb spent several years in Saskatchewan where she took up various fields of research. In 2011 she returned to BC and became a widow. Her expertise in predator behavior lead her to research unknown species of animal referred to as Bigfoot in the Skeena region for over a decade. In 2022 she remarried. She plans to return to Saskatchewan and then on to Oklahoma where her husband works and resides. She is currently 55 years old and still very passionate about her research.
Research History since 2004
Director, UFO Investigator/Researcher
Northwest Saskatchewan UFO Research Center (NWSURC)
Founder, CEO, Director Zone 7, Lead Investigator
Saskatchewan Provincial Paranormal Research Center Incorporated (SPPRC Inc.)
Director, Investigator/Researcher, Forensics
Centre for Physical Trace Evidence (CPTE), Unexplained Animal Deaths (UAD) Research & Trace Unknown
Director, Investigator/Researcher, Skeena Bigfoot & Trace Unknown
Published
Trace Unknown. ISBN-10 1329655427, ISBN-13 978-1329655423. Published in 2016. Unknown species research in the Skeena region. Including a profile on Bigfoot. 204 pages. No longer available. 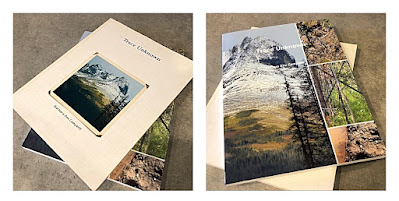 If you are using mobile, click view web version. 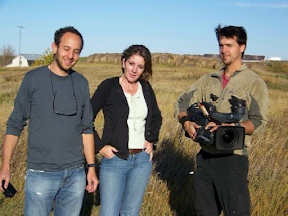 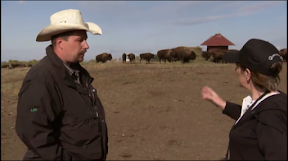 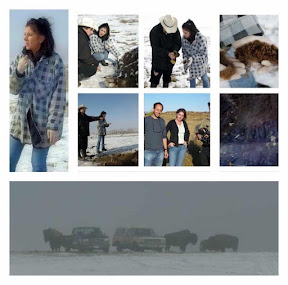 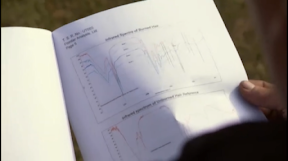 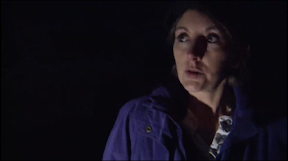 Showing how cattle are not easy to approach 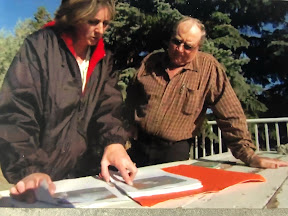 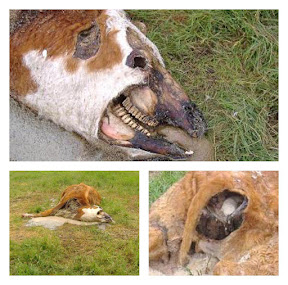 One of Barb's cases 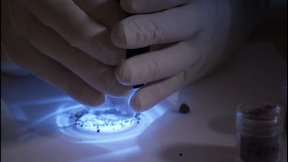 Looking at soil sent by Charles Topal from Cupar, SK 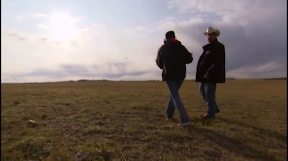 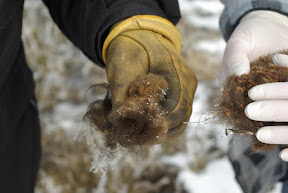 Shaved sections were singed where it had been removed. Lab results revealed 3HAA.

Some of Barb's media coverage 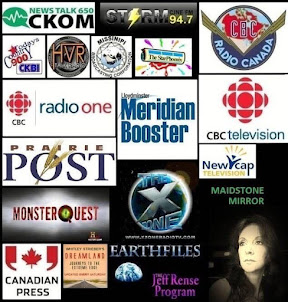